About 5 months ago, I tested our apartment’s water for lead and then patiently waited for the results.

I definitely did not expect it to be a quick turnaround, but I was curious as to when I might hear back, so I called 311, Chicago’s information line. They let me know that I shouldn’t hear any official results from the Chicago Department of Water Management unless our lead levels were above the limit.

And I didn’t hear anything.

That is until Saturday when I saw a letter from the Department in our mailbox. Naturally, I freaked out since I was told I wouldn’t hear from them unless it was bad news. I quickly ripped open the envelope and pulled out a letter providing our lead results.

They ended up being under the U.S. EPA’s action level for lead, which is 15 μg/L or parts per billion.

Our first draw, done after our water had not been used for over 6 hours, was recorded at 3.3 μg/L. The second was taken 3 minutes afterward and recorded at 10.0 μg/L, and the third at 5 minutes recorded 5.0 μg/L.

I found the last two draws odd since what makes the most sense is for your initial draw to be the highest and your sequential draws be lower given that the water has been flushing through the pipes. No idea.

Besides that, the rest of the letter just explains where Chicago’s water comes from, that it doesn’t leave the water treatment plants with any detectable lead in it, the health effects of lead, common lead sources, and steps to reduce lead exposure.

While I was waiting for my results, I had reached out to my landlord to find out if he knew if our services lines had been replaced semi-recently. He knew the previous owner did a gut rehab of our building, but could not be for sure if our lines were replaced.

So we aren’t totally poisoning ourselves everytime we drink from the tap, but I am still slightly concerned. My next step now is to look into a filter specifically for lead using Environmental Working Group’s Tapwater Database.

Does anyone have any suggestions of water filters they have tried? Let me know!

If you live in an old building in Chicago have you ever wondered if your water service lines are made of lead?

Good news is that you can test it for free with a water quality test kit from the Chicago Department of Water Management.

I requested my free kit about 2 months ago and it finally arrived on my doorstep not too long ago. I had originally requested one for my previous apartment building, but it did not arrive in time before we moved out (if it arrived at all).

Testing our water was easy peasy. All I had to do was follow the instructions and put the box back out on the porch for pickup.

Before testing, you cannot run water for at least 6 hours. This allows your water to settle in the pipes and will give a more accurate reading. So no toilet flushing, showering, laundry, nothing. I completed the test right when I got home from work or you can do it in the morning after waking up. 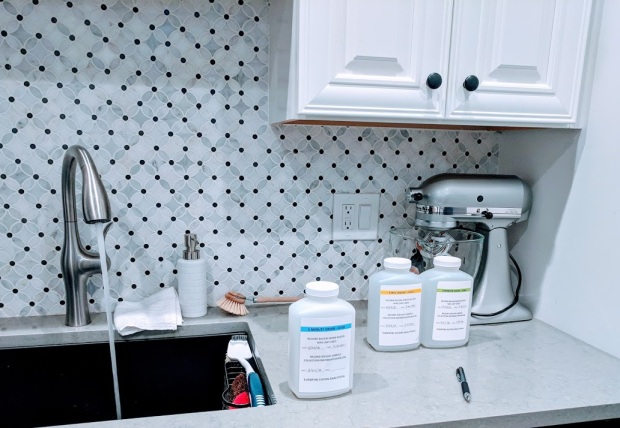 There were three different sample bottles to fill while the sink was flushing. One for when you immediately turn on the tap, one for three minutes later, and one for five minutes since turning on the tap.

I then filled out a form marking the dates and times the samples were taken and any additional information about our building. I didn’t know when our pipes were last replaced, but I was able to put down that our building is 130 years old.

After that, I packed the bottles back up in the box, scheduled a pickup, and then set it back out on my doorstep.

I will be contacted by the Department of Water Quality with the results via phone or email and the results will be provided to the Illinois Department of Public Health and Illinois Environmental Protection Agency, as well as posted here.

So our results are TBD and I will let you know when I hear back! If you are interested in testing your water quality, fill out this form.