Saturday, April 29th, I had the opportunity to be a part of the 200,000 people marching in solidarity with environmental regulations, climate protection, and the U.S. Environmental Protection Agency down Pennsylvania Avenue.

Thousands joined in sister marches all over the world.

D.C., the home of the President (when not at Mar-a-Lago), and my home for 2 years was plastered with signs defying the administration’s 100 days of damage.

I have never been a part of such a large-scale protest march before, even though it is now becoming the norm. We overheard another marcher saying they had not been to a protest since Vietnam.

As the clouds parted, we gathered near the Capitol, trying to stay in the shade of the trees as long as possible, before lining up in the street. Once we were assembled, we baked in the sun, sweat pouring down our backs. 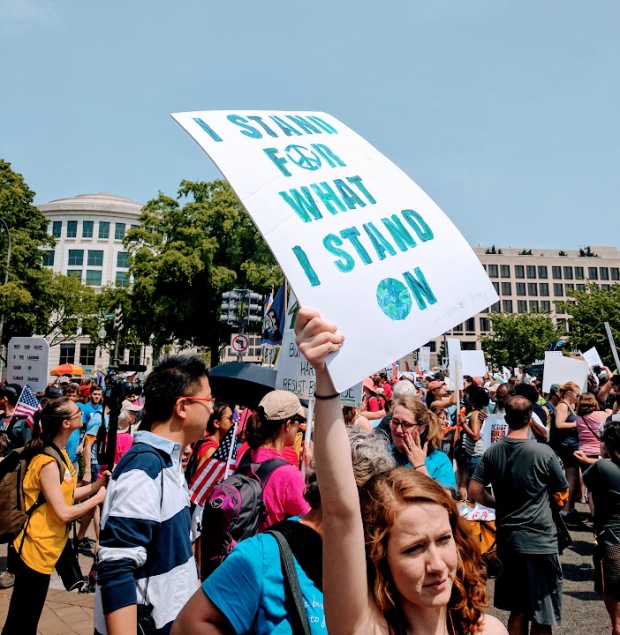 Everyone we saw and met was kind and generous and strong-willed to be there in the heat. There were babies, dogs, kids, and grandparents marching for clean air and water for their grandchildren. 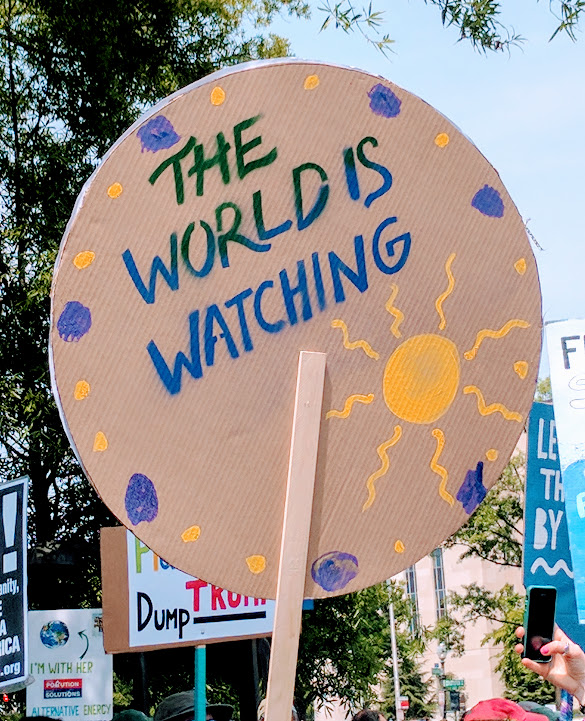 It was an extremely peaceful march. I saw zero incidences of conflict or arrests, just concerned citizens. Everyone walked, holding up their signs, frying in the relentless sun. 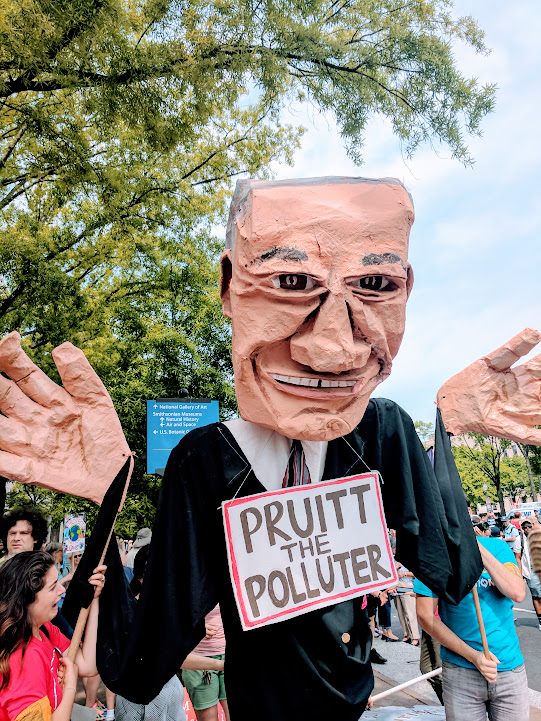 There were times when chants were shouted, especially when we passed the Trump International Hotel. 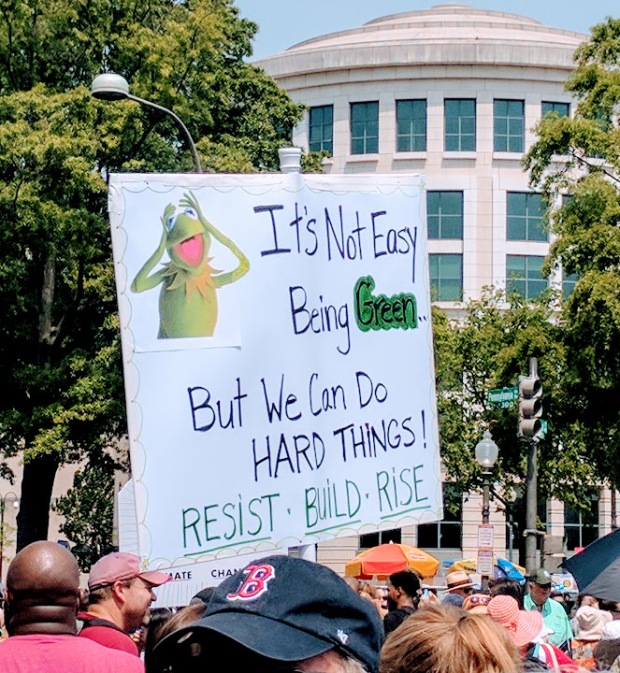 The Newseum sits on Pennsylvania Avenue. On the outside of the building is a bold reminder of our first amendment right to peaceably assemble and petition the government.  How appropriate.

The signs, the outfits, and yes, the puppets, were all creative. These people spent hours and days getting ready for their voice to be heard, even if the President was not physically in the District to bother to listen.

We proceeded along towards the White House at a decent pace, only bottle-necking shortly in front of the hotel. 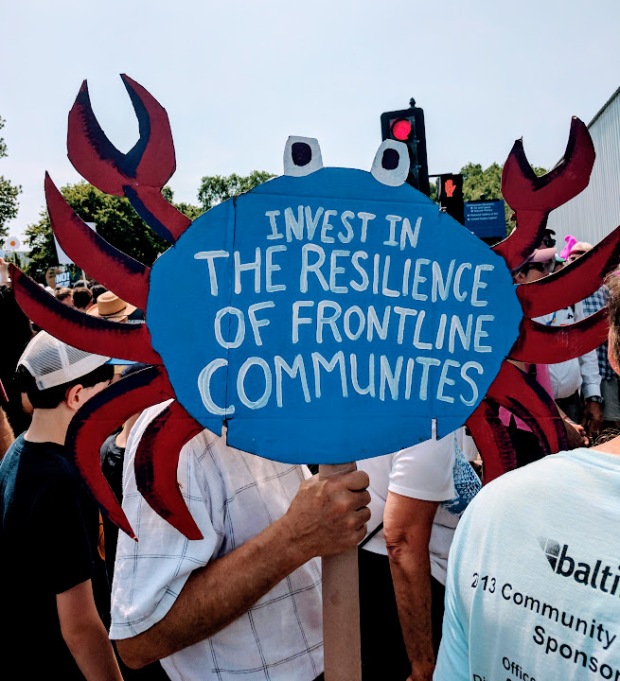 The sidewalks were crowded with onlookers and marchers taking a quick break to sit in the shade.

With the higher than normal temperatures, we had to be very diligent with our water, as we would not get a chance to refill until the end at the Washington Monument.

Ironically, entrepreneurs were taking advantage of the thirsty by peddling water in disposable plastic bottles to the crowds. Most people had their own or wore CamelBaks (great idea), but sometimes thirst is too overpowering, an issue we are going to have to deal with more and more in the future. 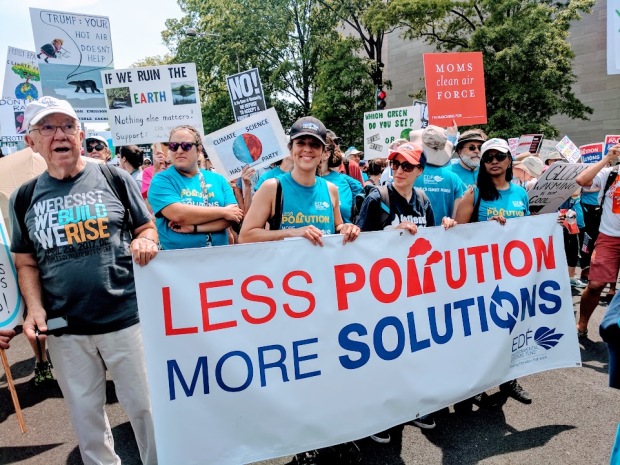 As we approached the White House, the crowd started to spill out into Lafayette Square to be rescued by the benches and shady trees.

It was an experience I will never forget, even though it is only a blip on the radar of this administration.

I am positive we won’t be backing down soon.

The chants we repeated basically said it all.

I am heading back to DC this weekend to attend the People’s Climate March, planned for Trump’s 100th day in office.

On Friday, I will be spending the day in an advocacy training held by EDF Action.

On Saturday, we will march.

Keep on the lookout for a post on my experience marching in DC.

Will you be joining any of the sister marches around the world?