I have lofty goals sometimes and try to fix things that are in need of repair.

The key word is “try” because it is been proven that I am not a skilled seamstress as outlined in this past post. Luckily, I received a basic sewing machine class for Christmas and am on my way to improving my sewing skills a bit.

My attempt to patch the hole in my jeans failed miserably and I ended up hoarding that pair until I could turn them into housing insulation.

Since then, I recently had an older pair of jeans rip a hole in the crotch while I was doing an impersonation of an Olympic curler (yes, you read that right). As I glided into a deep lunge, I immediately knew my pants were done for.

But like last time, I held on to this pair because I knew there was a way to bring them back to life even if it wasn’t fixed by me.

A couple of weeks later, while walking down the street, I noticed a storefront that advertised denim repair and thought I would give it a shot. So I brought them over to Mildblend Supply Co, paid $25, and a week later had fully repaired jeans.

Where is the fixed hole? It is hard to tell!

Twenty-five dollars seems like a lot for just fixing a hole, but its cheaper than buying a new pair of quality jeans.

According to the employee who was sifting through all the repaired jeans to find mine, their store is one of the only ones in the Midwest that has a darning machine (check it out on their Instagram). They did an amazing job. Can you even tell where they fixed it?!

Given that the probability of me ripping my jeans is pretty high, I foresee going back there again.

In Chicago and have hole-y jeans (that aren’t supposed to have holes, not those trendy ripped ones)? Then check them out!

My jeans always rip in the exact same place. Right in the crotch area.

In the past, I have had my grandmother patch them up for me. Sometimes the same pair would get repaired several times like the one below. 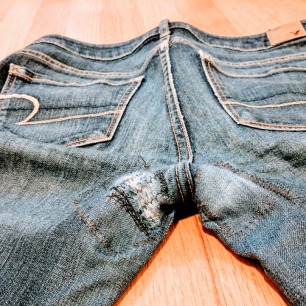 While folding my laundry last week, I noticed my newest pair of jeans (over a year and a half old) have finally achieved the dreaded crotch rip. I was not shocked or surprised. This was bound to happen eventually.

Besides this tiny hole in a not so noticeable spot, the jeans are just fine. There was no need to fret, I was going to patch them myself! 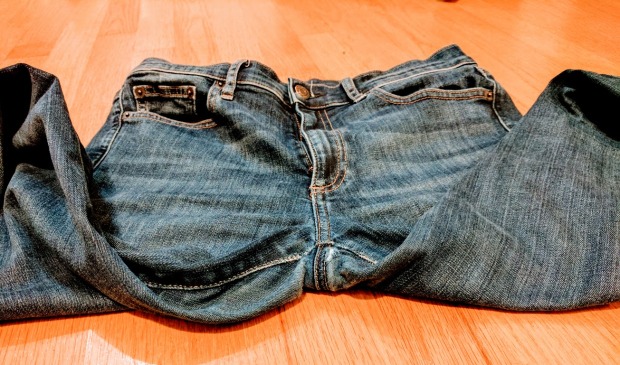 My sewing skills are even more sub-par than my knitting skills. I can sew buttons and seams together, but nothing this extensive (is this considered extensive?).

Now was my chance to learn a new skill that I could continue to use for years to come!

First, I needed some supplies I did not currently have in my possession.

I looked up what pinking shears cost and they aren’t too expensive, but so far I have gone my entire life not needing them, so there is no point in making that purchase now. Instead, I chose to borrow a pair from my grandmother. #vintage

After a quick trip to Jo-Anne’s for fusible, I gathered all my supplies and was ready to go.

First things first, I cut out a patch of denim from my now scrap pair of jeans. My plan was basically just to reinforce the crotch/thigh rub area so it would not rip any further.

I figured sewing the patch straight into the seam would help keep the fabric strong. To help, I used fusible, which basically turns your patch into an iron-on. I have never used fusible before and figured it could not hurt my pants any further. 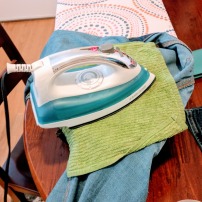 Once the patches were ironed on, it was time to start sewing and this took a much longer time than I had thought! If I had a sewing machine this definitely would have been done sooner, but alas I do not. A used sewing machine is on my wish list (hint hint). 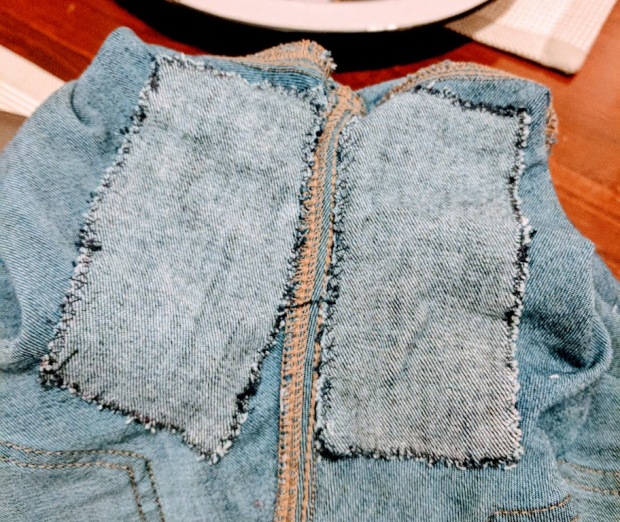 Sewing the patches too frustratingly long. I started this Friday afternoon and did not finish until Sunday evening, but hey, at least I can wear my jeans on Monday!

They aren’t perfect, but I think I did a pretty decent job for my first try and I know I have more to learn.

Have you ever tried to patch your favorite pair of jeans before? Do you have any better suggestions for the next time this happens to me?