Last night I turned to K and said, “Where are the pliers?” Giving me a weird look, he asked why. I nonchalantly stated I needed them to remove the bristles from my bamboo toothbrush.

Either way, my first bamboo toothbrush’s life span as a toothbrush came to an end. After removing the bristles, the handle can be composted in a commercial facility.

So I took a seat and started to pull on the bristles. At first, nothing happened. I yanked and yanked until bristles burst from my toothbrush. So the real lesson here is, do this over an easy to clean surface because bristles WILL BE EVERYWHERE.

After the first chunk of bristles, it became easier and easier to remove them. 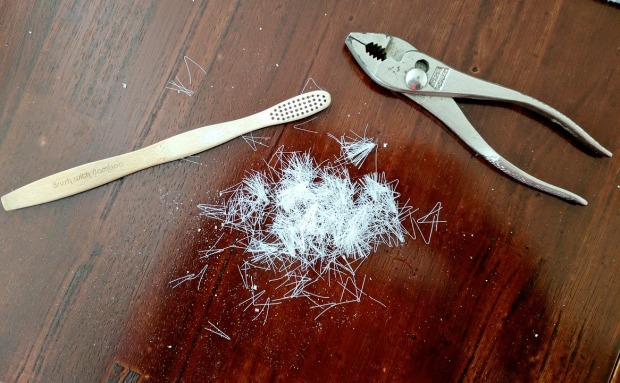 I did my best to keep the bristles and the toothpaste dust contained. When I was finished, I marveled at the fact that I just took 10 minutes to pull bristles out of my toothbrush just so it could be composted. I think it is definitely worth it over the way millions just simply toss conventional toothbrushes in the landfill without a second thought.