Last night I turned to K and said, “Where are the pliers?” Giving me a weird look, he asked why. I nonchalantly stated I needed them to remove the bristles from my bamboo toothbrush.

Either way, my first bamboo toothbrush’s life span as a toothbrush came to an end. After removing the bristles, the handle can be composted in a commercial facility.

So I took a seat and started to pull on the bristles. At first, nothing happened. I yanked and yanked until bristles burst from my toothbrush. So the real lesson here is, do this over an easy to clean surface because bristles WILL BE EVERYWHERE.

After the first chunk of bristles, it became easier and easier to remove them.

I did my best to keep the bristles and the toothpaste dust contained. When I was finished, I marveled at the fact that I just took 10 minutes to pull bristles out of my toothbrush just so it could be composted. I think it is definitely worth it over the way millions just simply toss conventional toothbrushes in the landfill without a second thought. 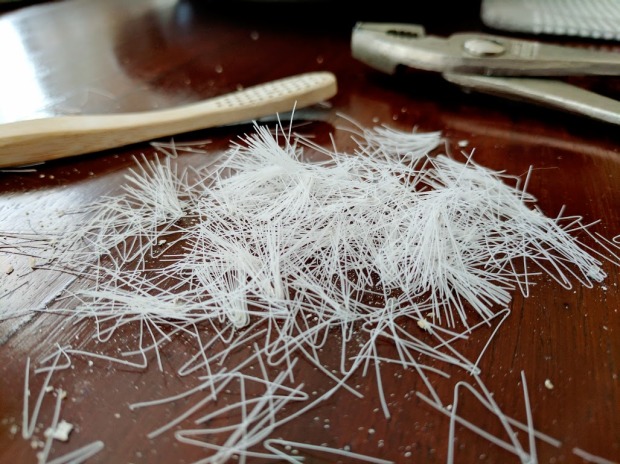 Recently, I made the switch to bamboo toothbrush from Brush with Bamboo. I bought a 4 pack on

Every component of the toothbrush is plant based. The handle is bio-degradable, the bristles are plant-based and can be recycled, and the packaging is compostable as well.

I was in need of a new toothbrush anyway, so once I got them, I added my plastic one to the cleaning bucket.

When I first started with the bamboo toothbrush, all I kept thinking was,

After awhile that feeling went away. When you have been brushing your teeth with a plastic toothbrush your whole life, it is going to be a bit of a difference at first. Now it is fine.

Many other zero-wasters have blogged about their experience using bamboo toothbrushes and their benefits. Check them out!

I went to the dentist yesterday and as I was making my way there, I kept thinking about the plastic bag of “goodies” they give out to all their patients. Usually this involves a toothbrush, floss, toothpaste, and special floss for those with permanent retainers, all in a nice plastic bag. There may even be some coupons in there.

So after my cleaning, the dental hygienist started to pack up my “goodie bag,” and I quickly stopped her with some combination of the following arguments:

To accumulate less stuff, we have to learn the art of refusal and saying no to things we do not want pretty much anywhere we go.